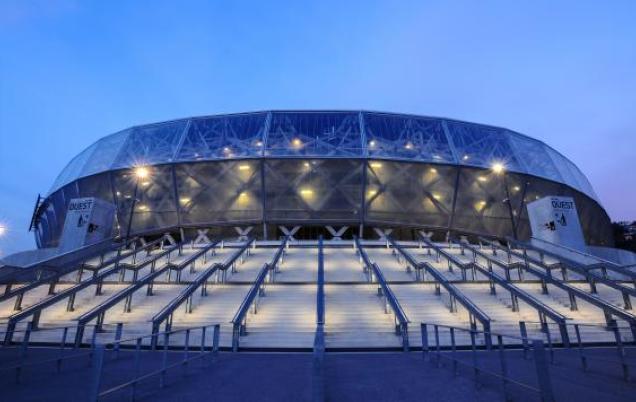 The Allianz Riviera, a model among UEFA EURO 2016 stadium

To mark the COP 21, the Allianz Riviera is showing that it can set a good environmental example among all Euro 2016 stadiums.

In a special article devoted to environmental standards in Euro 2016 stadiums, sports daily L’Equipe paid tribute to the work of the Allianz Riviera, which can successfully turn weather conditions (rain, wind, sun) into energy. Widely considered as a reference, the Allianz Riviera stadium stands as a genuine model in energy performance. In an interview conducted by L’Equipe, Bruno Gaiddon, a project manager at photovoltaic technology specialist Hespul, has asserted that “Nice really is exemplary.”

It was the City of Nice’s wish that the Allianz Riviera should be a model of integration and sustainable development in the Eco-Valley. VINCI and Jean-Michel Wilmotte have made it into a perfect model of its kind. These are some of its exceptional features:

The Allianz Riviera is one of the few stadiums in the world to feature a wooden mesh supporting structure of such a span. The structure’s manufacturing process saved 3,000 tonnes of CO2 as compared to using a more common material such as concrete, for instance.

• A photovoltaic power plant on the roof

• The first stadium to feature a fully independent sprinkler system

The roof of the Allianz Riviera collects rainwater which is then stored in 3 holding basins located on the car park level in the foundations. This system makes it possible to meet the high demand for water during matches and other events, to water the pitch and to reduce maintenance costs.

A unique system in any stadium, which channels the wind from the Var Plain, naturally cooling and ventilating the stadium. The technique is similar to that used by the Romans in their arenas.

The Allianz Riviera draws its resources (heating and cooling) from the layers beneath the Var Plain, thus taking part in the drive to halve the use of resources.

Allianz Riviera Chairman Sylvia Colloc is happy that at a time when the COP 21 is closing, she should be working to serve a facility that is a leader in sustainable development. She believes that “sustainable development must become the core engine for all current and future projects, whatever their business sector.”