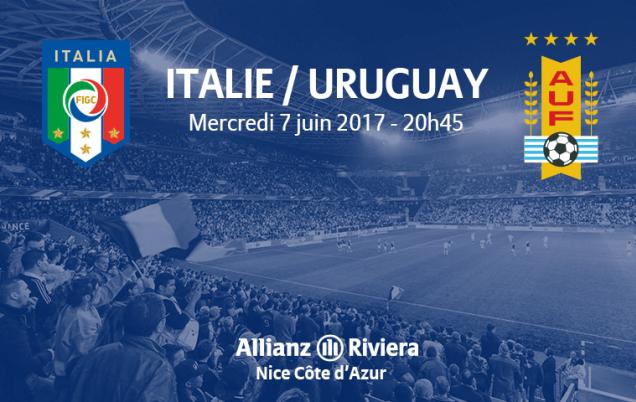 Upcoming historical match between Italy and Uruguay at the Allianz Riviera

On Wednesday June 7th, 2017 at 8:45 pm, the Allianz Riviera will have its first opportunity to host Italy’s national football team as it faces the Uruguayan squad for an international meet. This top-notch encounter will oppose two of the foremost title holders in football history: the Squadra Azzura, 4-time world champions as well as holding one European championship and one Olympic gold medal; and the Celeste, 2-time world champions, 15-time winners of the Copa America, and 2-time Olympic gold medallists.

It will be the second time that the Squadra Azzura plays in Nice, after the friendly game against Austria which took place on August 20th, 2008 (2-2) at the Stade du Ray.

Italy and Uruguay have met ten times in the past, and so far the advantage belongs to Uruguay with four wins against Italy’s two, and four draws. This upcoming friendly match will be the fifth game played on neutral ground, after one in the Netherlands and two in each Mexico and Brazil. To date, five games have been played in Italy, against only one in Uruguay at the Centenario Stadium in Montevideo for the Mundialito (the Copa d’Oro opposing the world champions in 1981).